Alzheimer’s Disease is an under-recognized public health crisis. And while the word Alzheimer’s strikes fear in aging Americans more than any other word, globally the number of people diagnosed is expected to double every 20 years. Not only does Alzheimer’s come with a tremendous cost to our healthcare system, it takes an emotional toll on families as they care for their loved ones, while watching them slip away. This episode discusses Alzheimer’s Disease from a caregiver and a public health perspective.

Source:  US Against Alzheimer’s

Alzheimer’s is the most expensive disease in the nation.

Alzheimer’s is the most expensive disease in the nation. The financial costs of Alzheimer’s for families and the government are enormous.

Total annual out-of-pocket payments in the U.S. for healthcare, long-term care, and hospice care for people with Alzheimer’s and other dementias is projected to total $259 billion in 2017 and increase to $1.1 trillion by 2050,9 if we don’t develop a treatment or cure.

Federal research funding is inadequate for the scope of the problem. 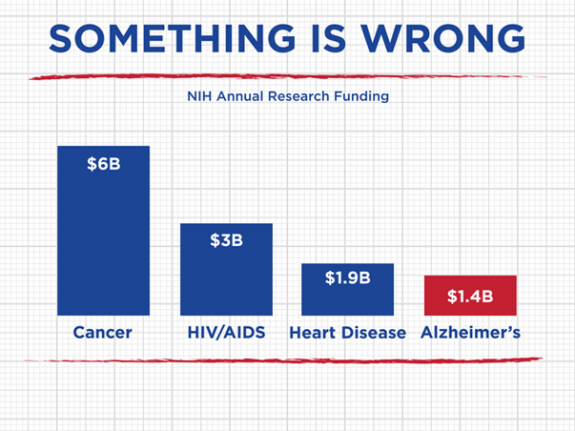 The research community believes it will be possible to prevent or control Alzheimer’s within the next 10 years with adequate research funding and other reforms to accelerate the drug pipeline.

Federal research funding is a fraction of that of other major diseases.

More than $250 billion is spent annually in out-of-pocket healthcare  for Alzheimer’s, which is more than 179 times the amount spent on finding a cure.

For every dollar the federal government spends today on the costs of Alzheimer’s care, it invests less than a penny in research to find a cure.

It is important that our government officials make fighting Alzheimer’s a national priority and dedicate adequate resources to research. Go to our action center for concrete ways that you can help.

Important clinical trials that focus on potential prevention and treatment for Alzheimer’s are under way. See our clinical trial page for more information.

Alzheimer’s is a global crisis that requires a global solution. It is a grave threat to the world’s health and finances if not stopped. Worldwide about 50 million people have some form of dementia, and someone in the world develops dementia every three seconds.12

When the world has faced catastrophic challenges before, nations have marshaled significant resources behind clear goals and objectives to achieve great things. For example, the world committed to ambitious, aggressive, and well-funded efforts to prevent and treat HIV/AIDS, tuberculosis, and malaria. Those efforts have paid significant dividends in lives saved and economic development fostered.

UsAgainstAlzheimer’s Chairman and Co-Founder George Vradenburg serves on the World Dementia Council to tackle this problem globally; find out more about their work here.

2 National Institute on Aging Number of Alzheimer’s deaths found to be underreported.

8 Nick Eberstadt. Hiding in Plain Sight: Social and Demographic Trends That Will Exacerbate the Impact of Alzheimer’s.

UsAgainstAlzheimer's
Our networks were formed to engage the communities most deeply affected by Alzheimer's through tailored programming and educational outreach efforts. United under the relentless force of UsAgainstAlzheimer's, each network has its own leadership and speaks with an independent voice.
Leeza's Care Connection
At Leeza’s Care Connection, we are all about helping you learn ways to cope and manage your role as a family caregiver. Think of us as a place for answers, a place to begin the process or to make it better. We are a supportive hug, a safe place to cry, a room for worry and a community of care. We understand that being a caregiver can be both a burden and a blessing, because we are a team of people who have been there. We can hold your hand and help you find answers on the difficult path you must walk NOW. We believe that you can be a warrior for your own health and your diagnosed loved one, through tips, tools and strategies for thriving.
National Institute on Aging
NIA, one of the 27 Institutes and Centers of NIH, leads a broad scientific effort to understand the nature of aging and to extend the healthy, active years of life. NIA is the primary Federal agency supporting and conducting Alzheimer's disease research.
BCBS Health of America Report: Caregivers
The role of family caregiver presents an array of challenges from physical, emotional and financial. While there are rewarding aspects of caring for a loved one, those positive aspects can diminish over a period of time impacting the health of caregivers as well as those receiving the care especially in the cases of early-onset dementia and Alzheimer’s disease. It leaves many caregivers actively looking for help and support.
Transcript PDF